These two pics are from super duper electrical genius Jim Williams work bench where he is working on a Galloping Goose. When we got the Galloping Goose it derived its power from low grade strips brushing against the axles of the wheels. If one had a totally flat track with no switches it might, just might be a runner. Our rolling stock runs outside (as well as inside) in all weather except in high winds. Hence the need to convert to battery power. Whilst in the gubbins Jim is adding an RC (Radio Control) card and a sound card. She’ll be coming round the mountain soon. 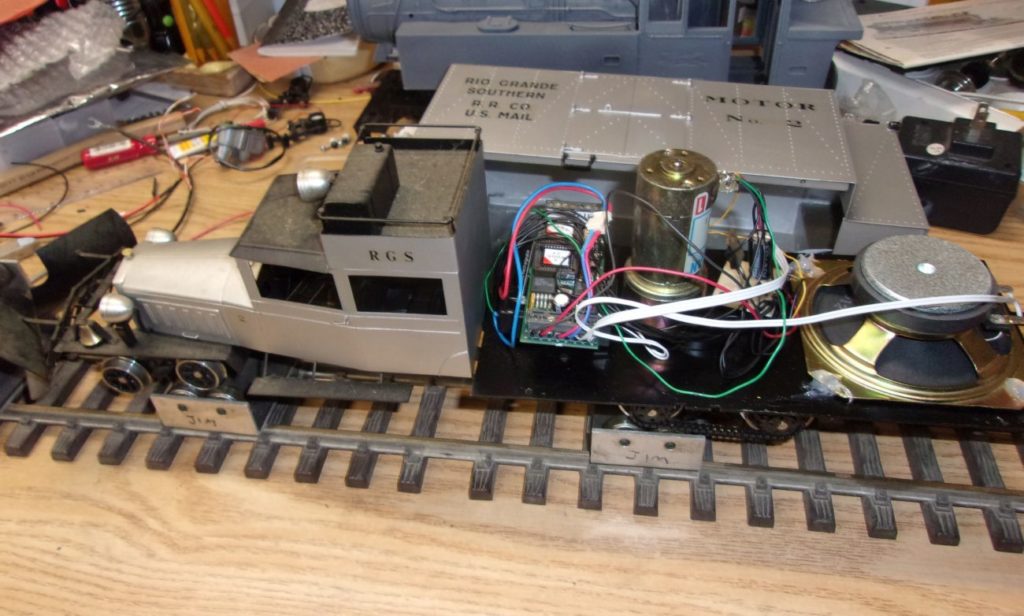 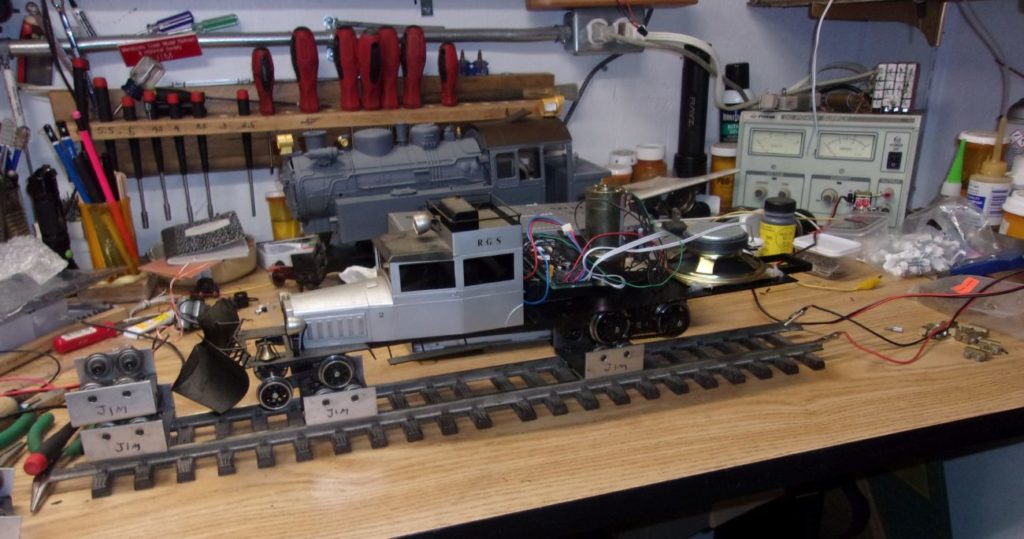 If you want to learn more about the real Galloping Geese go here.

Our pres(ident) is a stone bonkers genius at taking “mundane” railroad items and arranging them into abfab pieces. Here’s an example – a common or garden flat car with a MOW on top. 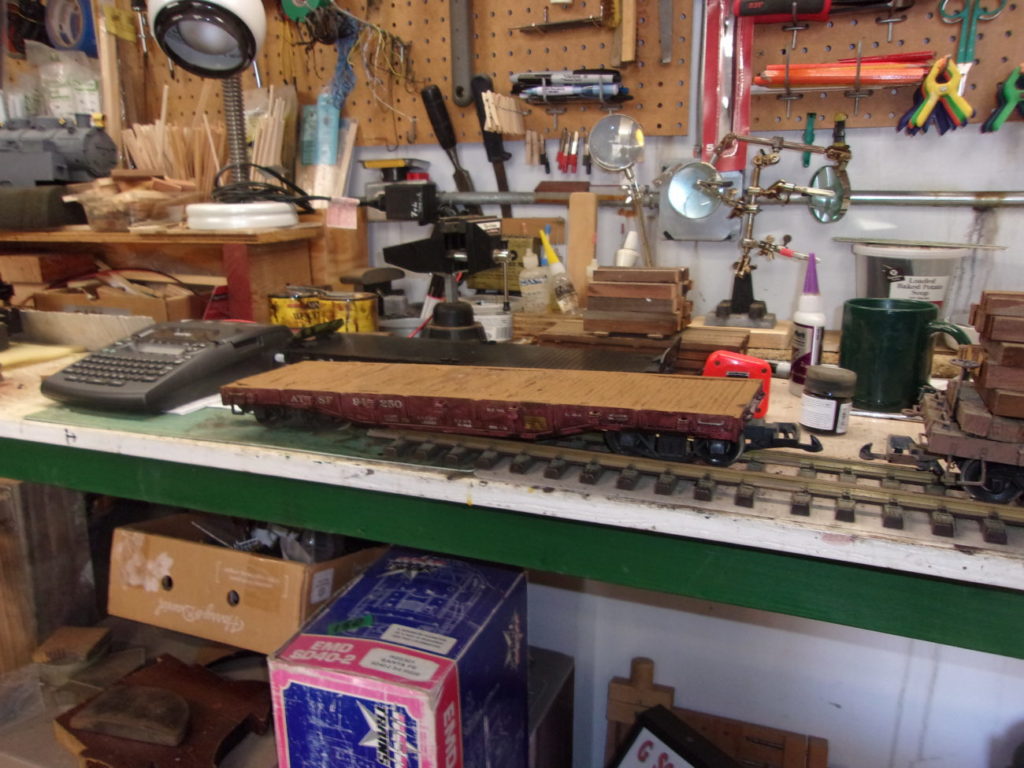 All the action is taking place on Chuck Whitlock’s workbench in our Workshop (a converted 20 foot container). 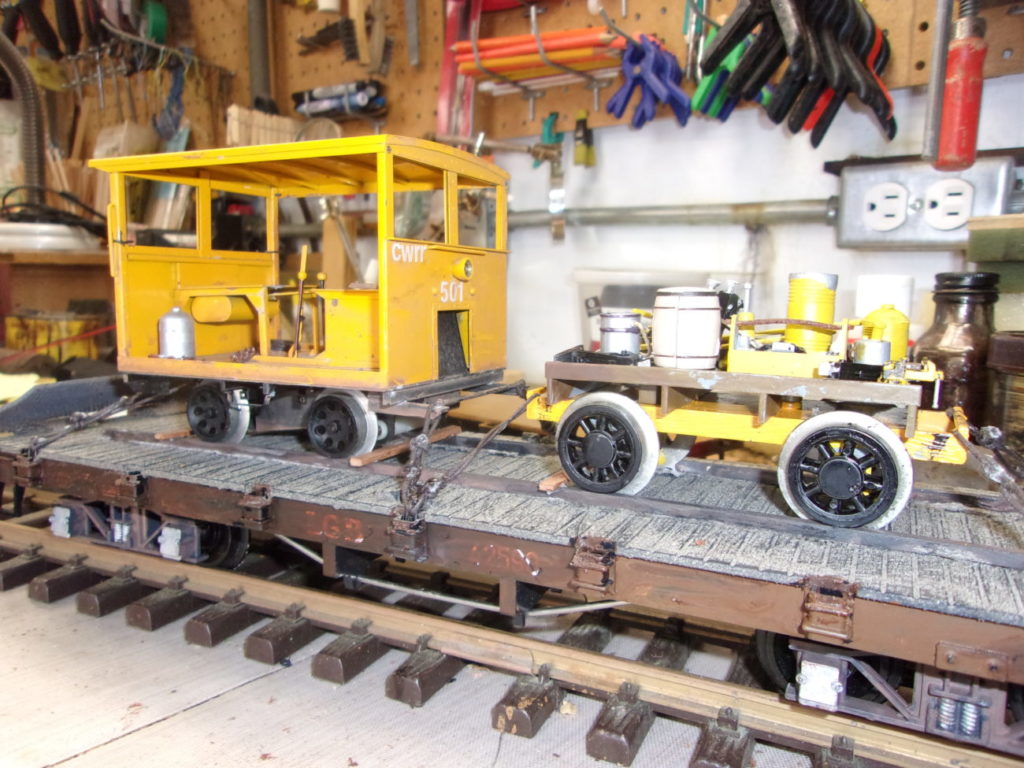 MOW placed on top of the flat car

Here you can see the details that Chuck has added to the wee truck attched by a link and pin to the workers car: 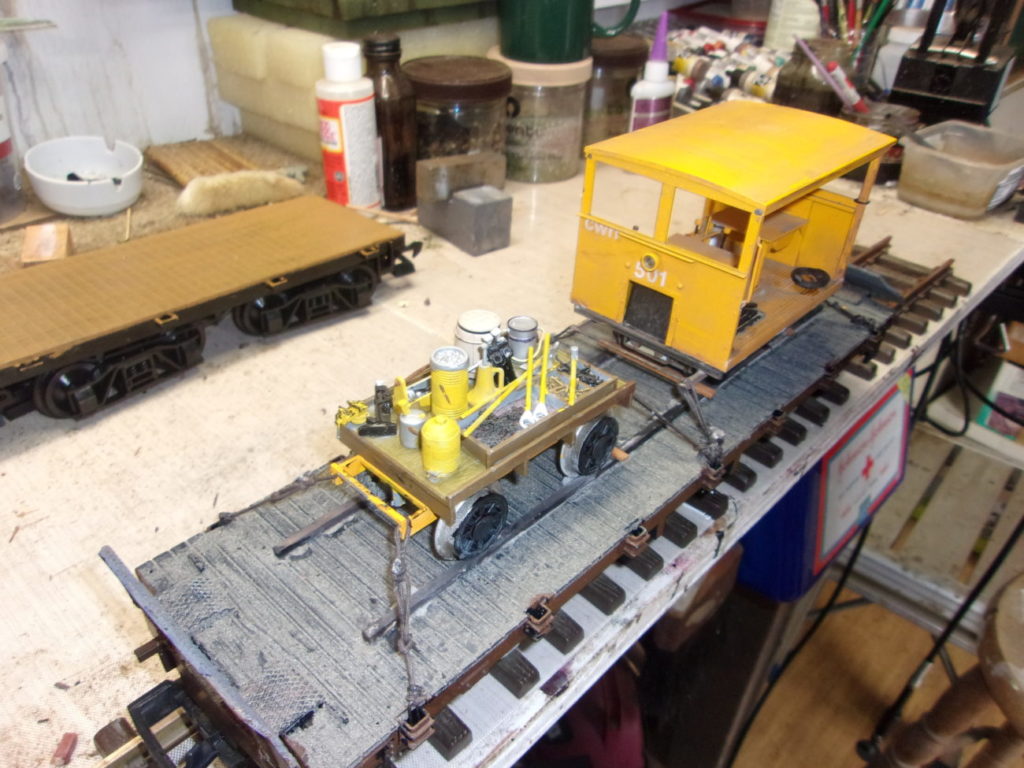 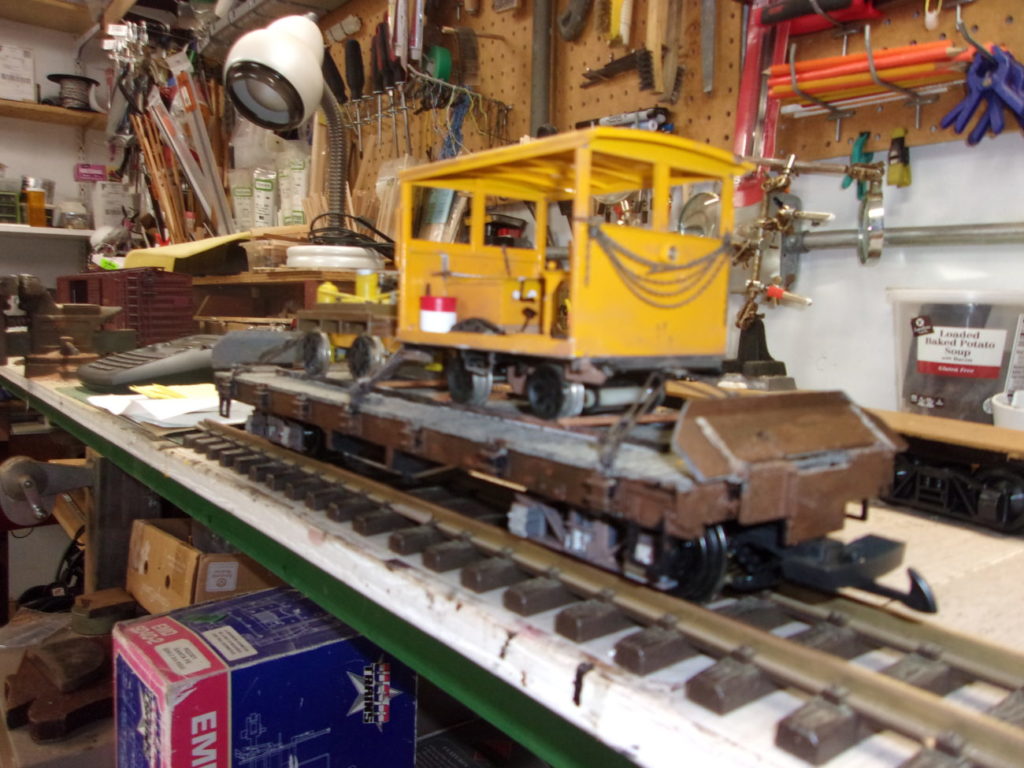 Ready to go out on the layout: 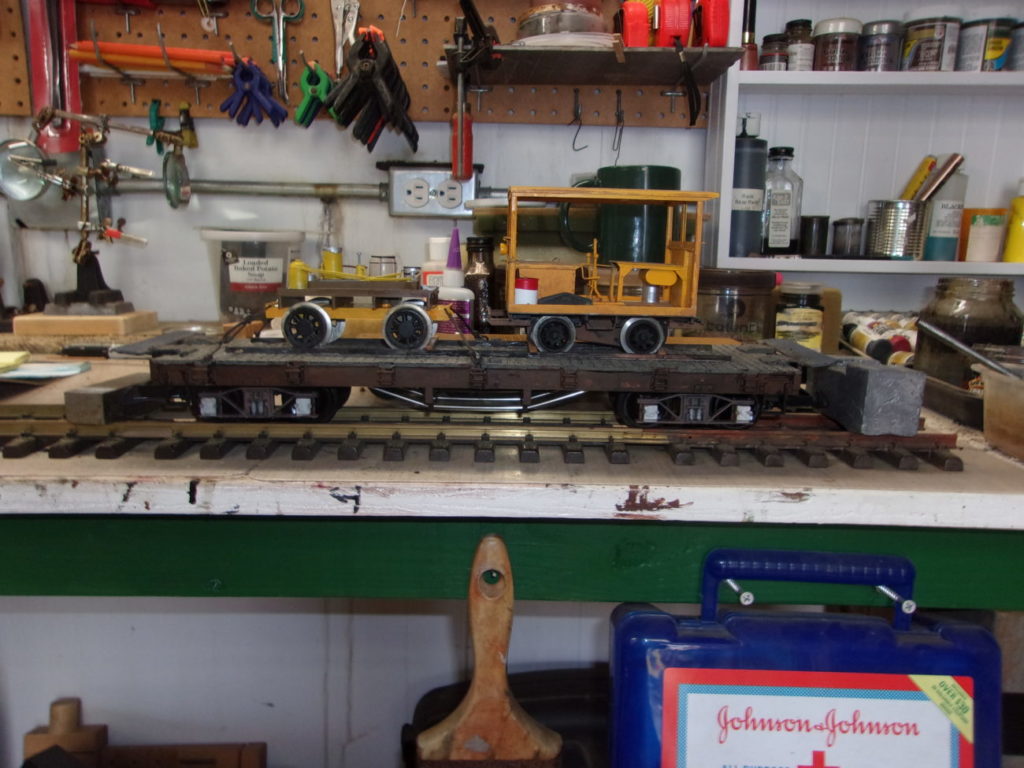 For the past year we have been creating scenery around the outside of the Barn. The Barn has a huge roof and as a result when it rains it’s like Niagara Falls on the scenery below. Hopefully, as of today, the downpour onto the scenery will cease – gutters have been installed. Club member Lonnie Dickson who was the superintendent of works for the project took these photos of the installation: 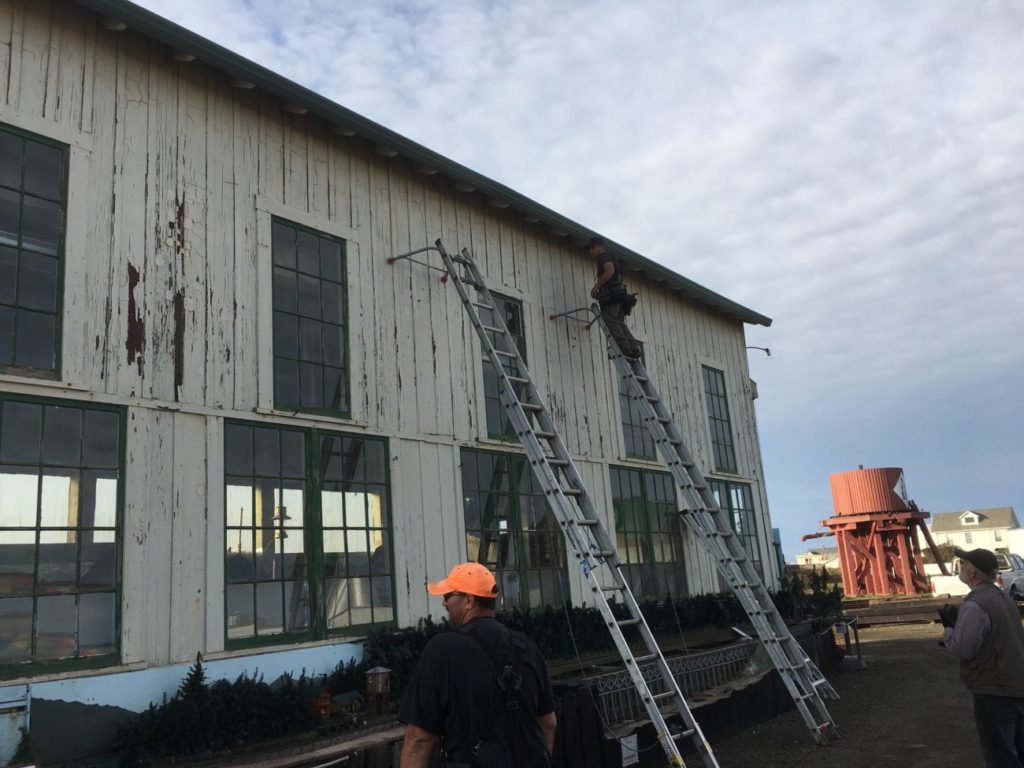 The gutter installation crew next removed the remnants of the old sign advertising our presence. Then came the placement of the new sign that tells people on the CWR side of the tracks where we live. The letters of the sign and logos were produced by our maestro of CAD Joe Cooper. Painting of the letters and backdrop was the responsibility of Slosher #1 (me). Lonnie affixed the letters to the backdrop with stainless  steel screws acquired by our electrical guru Jim Williams. 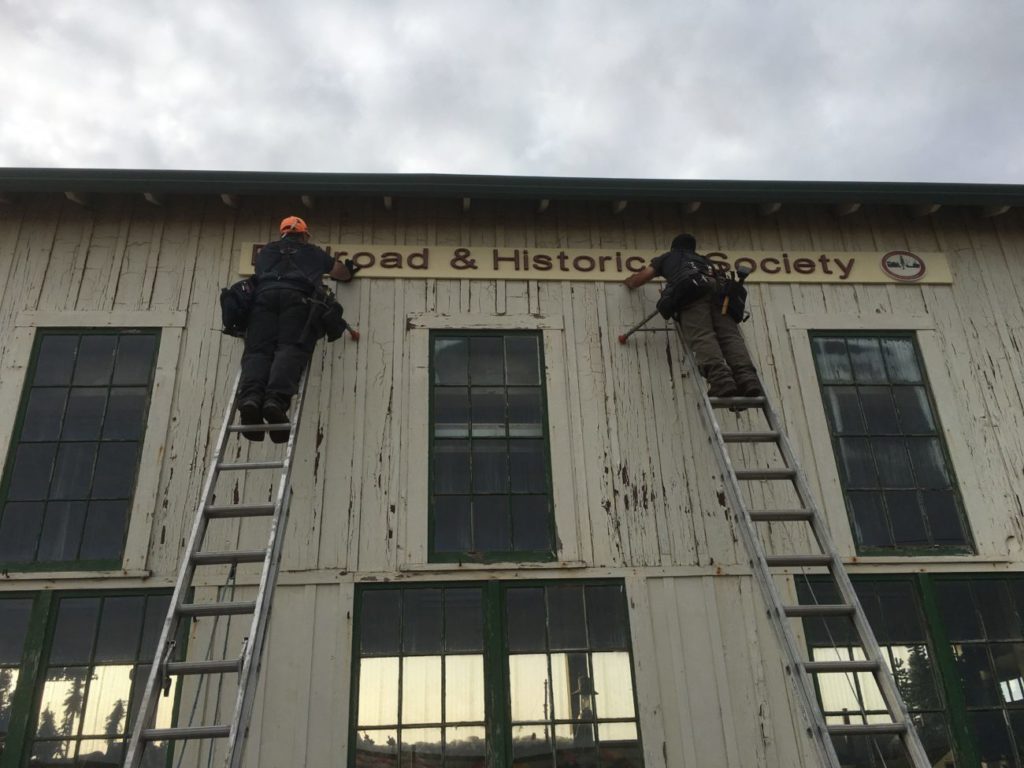 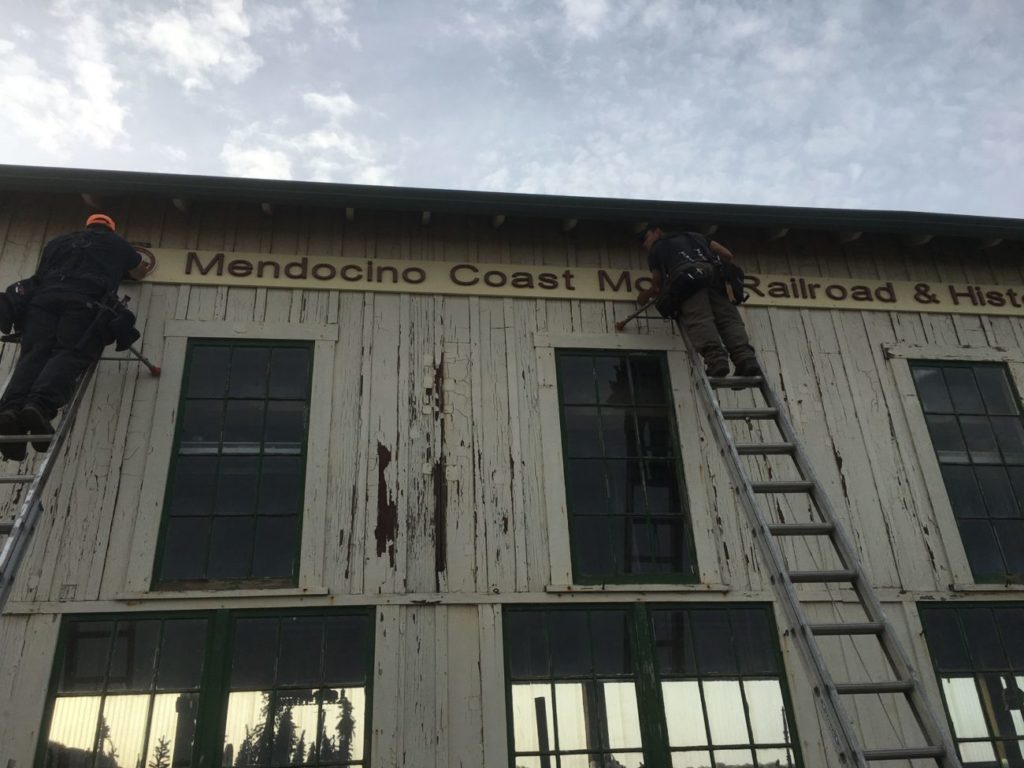 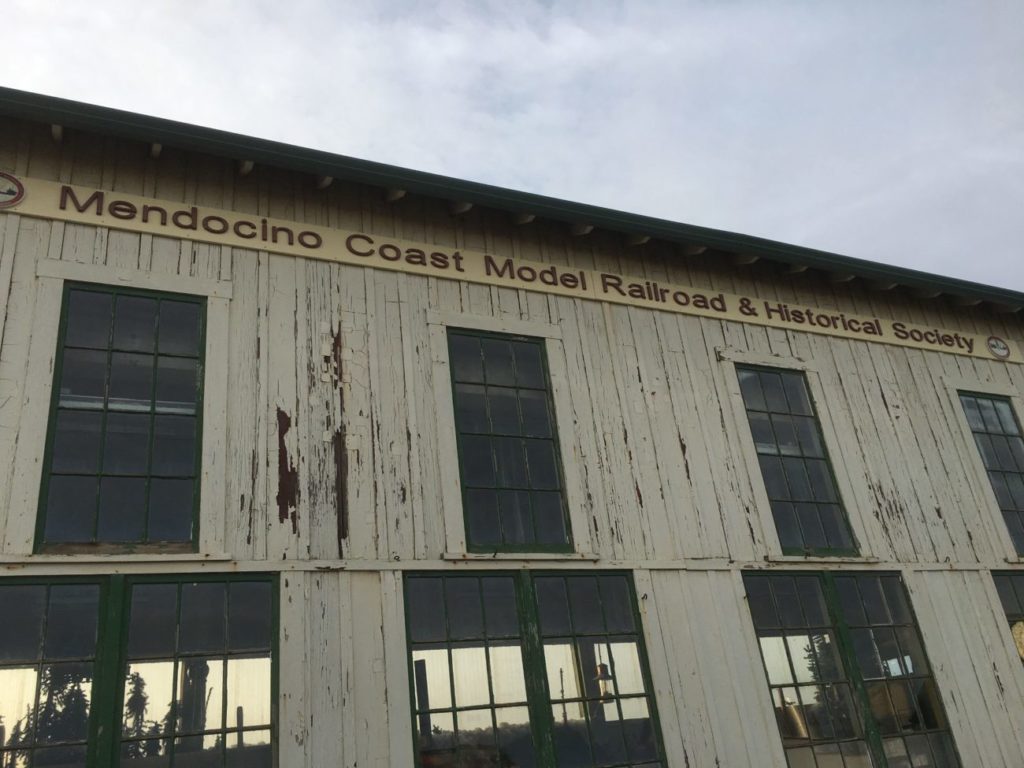 There has been a collective decision that the excess rolling stock and motive power should be made available to whomever might like them provided they make a modest donation to the club’s coffers. The excess diesels, which are too modern to be used on our layout, have been stored in my train room for nigh on two years. I brought them in and Chuck spruced them up by removing the accumulated dust and external detritus. The locos had a piece of green on top which I assumed meant that chief electrical engineer, Jim Williams, had given them the thumbs up. When shown to Jim he said he had never tested them.! We agreed that making them available without testing was not cool. Here’s the loco before testing …… 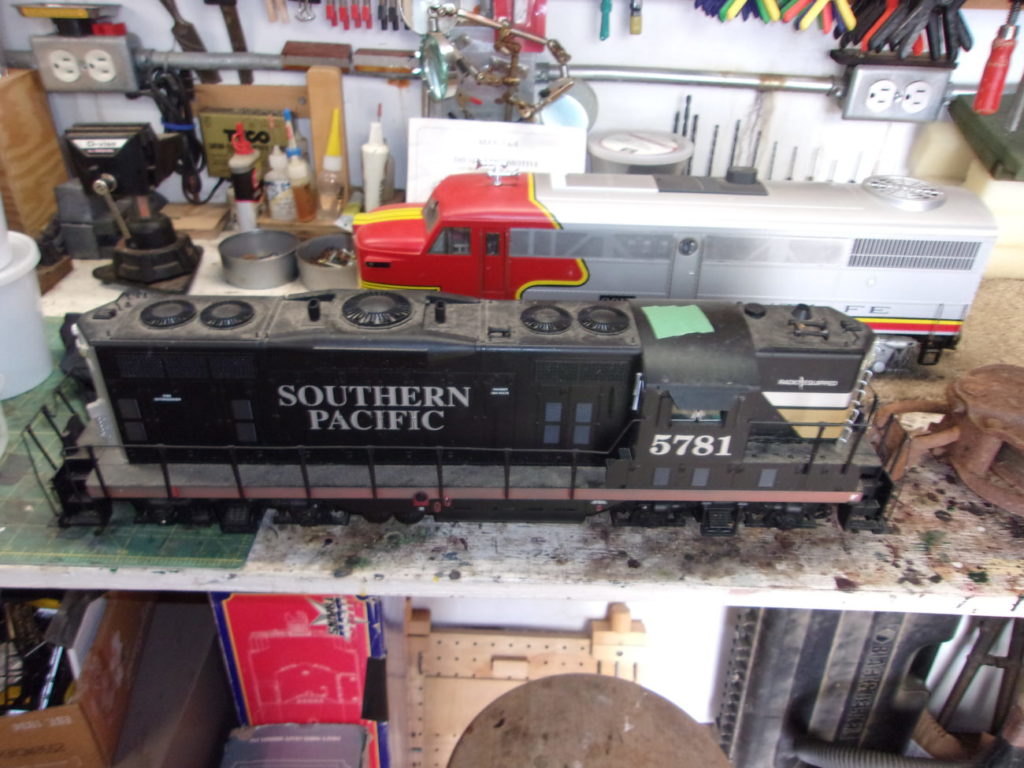 The loco before being checked 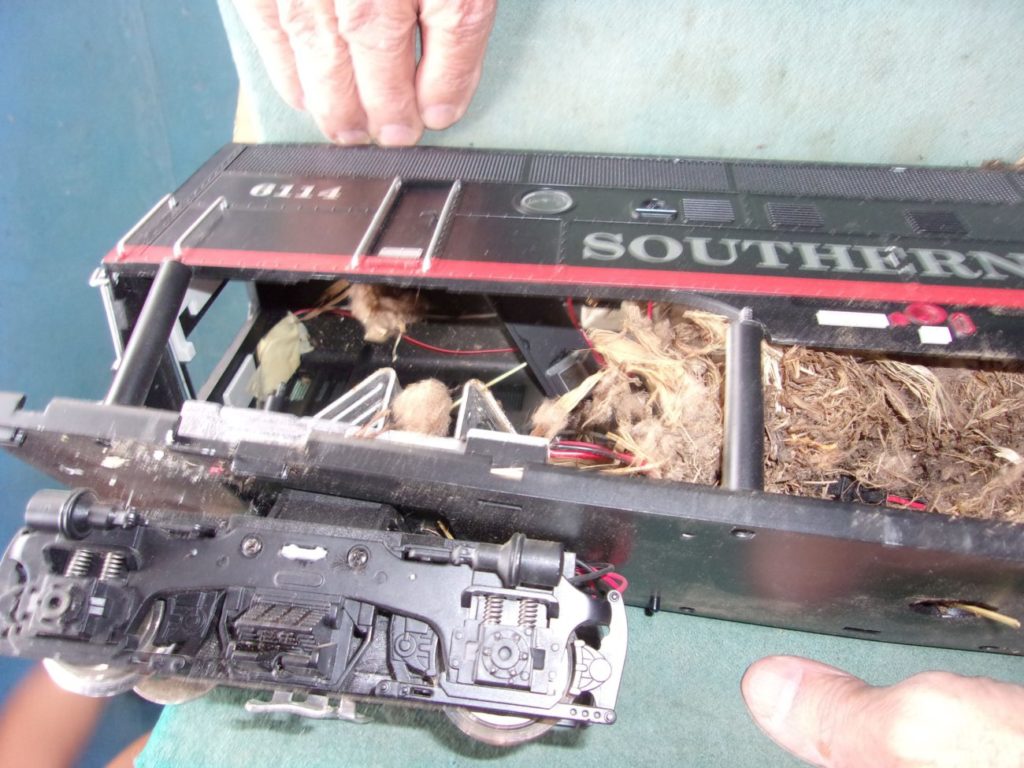 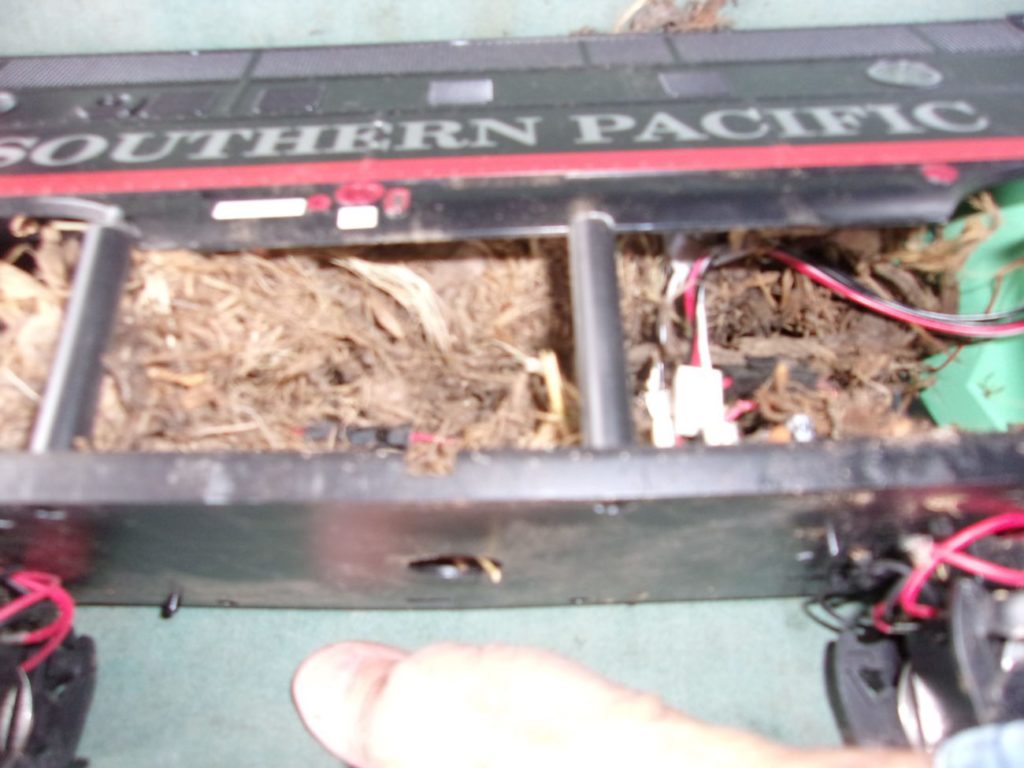 Chuck repaired the wrecked wiring in the top part of the loco and Jim cleaned and restored the “works” to operating condition. 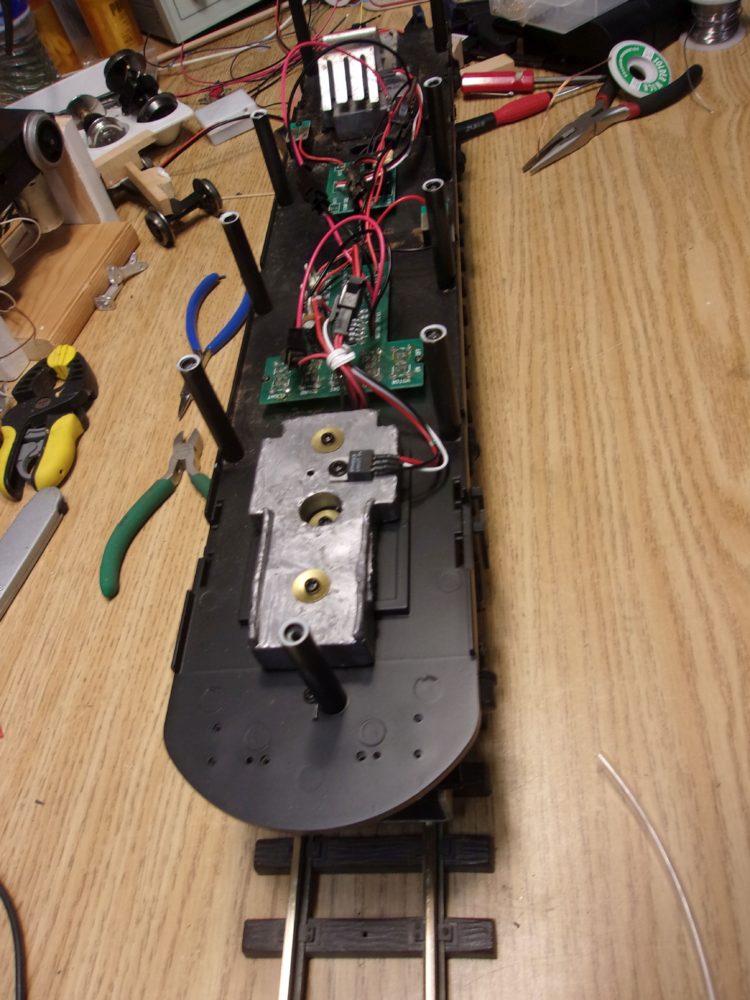 After cleaning with wiring repaired or replaced and tested 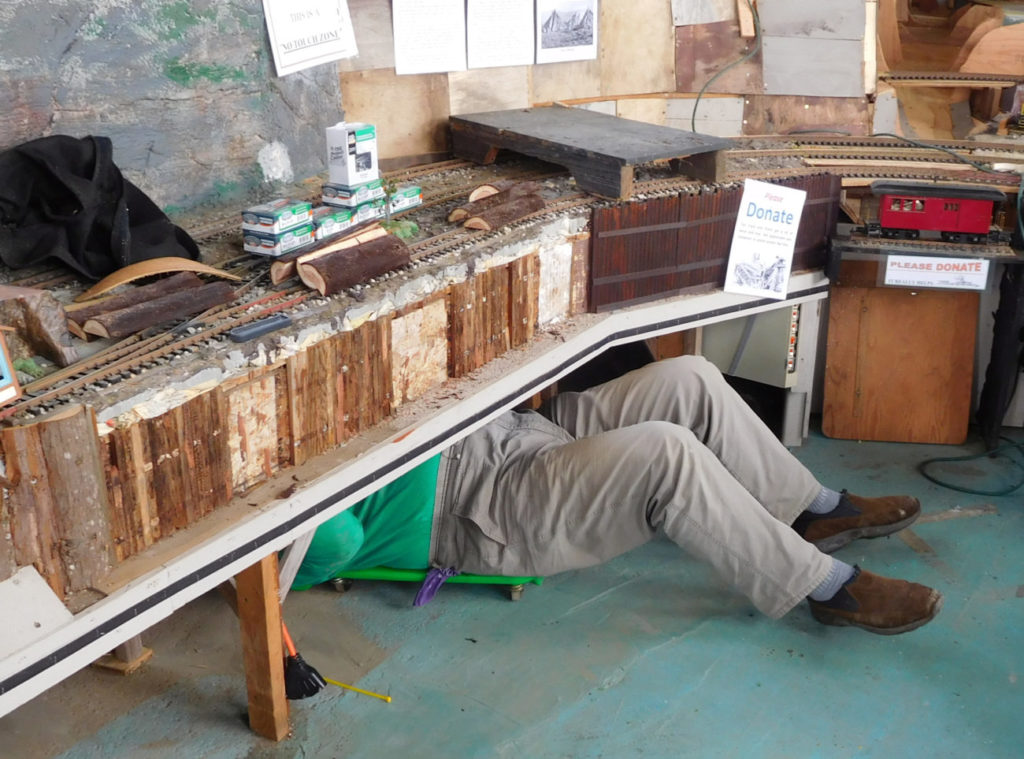